Mariko Kusumoto has made my passion for Japan even bigger than before. Im always daydreaming about visiting the Land of the Rising Sun, and one day I will, for sure. In the meantime, Im cherishing this love of mine from a distance - by buying books, looking at pictures, and finding new Japanese artists.

And that is how I came across Mariko Kusumoto. A multifaceted artist with a unique style, who makes mostly (but not exclusively) micro- and macro-sculptures in synthetic fabric: pretty pastel-colored see-through spheres which guard amazing secrets. Indeed, if you look closer, youll clearly see that inside them are jellyfish, sea anemones, flowers, dogs, and a million things. Mariko Kusumoto also makes many other things: jewels, resin and metal artwork. Lets find out more about her in this interview.

Hi Mariko, you work with different materials. Let's start talking about fabric.
Fabric is one of the most familiar of everyday materials.  Even if you say the word "fabric," it has various characteristics which draw out numerous sensations or emotions. Some posses wet and cold feelings of moisture, a sense of fluffiness and comfort, the mysterious, tranquility, the ethereal, fragility, subtlety, etc.  The fabric work tends to be more 'spontaneous' in conceptualization yet thoughtfully evolved. These works demand a different practice of time; fewer steps and, unlike quilting, for instance, the fabric pieces embrace a kind of randomness that is immediately adopted.   Fabric allows me to introduce translucency, a variety of colors, and a graceful atmosphere which I am not able to express with metal.  Also, the vibrant color makes you feel uplifted and gives you energy.

What about metal?
My metal pieces are initiated with very meticulous planning. Concept deliberation, the acquisition of many images, the manipulation of those images, the construction of a maquette. Finally the engineering of the body and individual elements comprising the piece. I enjoy the hardness, durability and permanence of metal and, additionally, by using different patinas, I can express the passage of time. 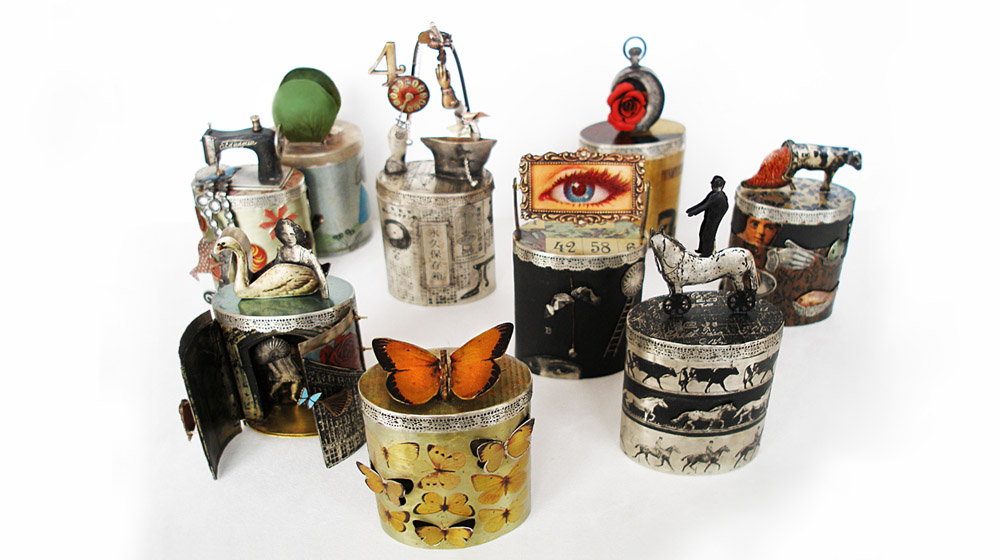 And finally, resin.
With the resin designs, I tend to find myself working in a similar manner to that of the fabric pieces.  The technical element--the resin admixture--is more involved than the assembly of fabric, and requires a timing factor not witnessed in both fabric and metal pieces.  In all of the aforementioned, the application of collage--the use of many images in metal versus a smaller number of parts with the fabric pieces--is significant.  I incorporate fragile objects into the resin such as flowers, seed pods, leaves, insects, etc.  These natural elements would return to the soil if remained unnoticed, but by capturing and enclosing them in resin, I can 'stop' time.  With resin, I am also fascinated by the possibility of encasing familiar, ordinary objects such as thread, buttons, microfibers, sponges, etc., thus giving them a 'new' life- they turn into something else, as if by magic!

Every artist has a source from which they draw their inspiration, in order to nurture their creativity. What is yours?
'Sources of inspiration' tend to be unpredictable, and result from any number of direct, sensory experiences: e.g., experiencing nature in its widest possibilities; a daily walk, and then changing course; visiting cities and other geographical locations not previously exposed to; the presence of fabrics; cultural artifacts.   Inspiration is everywhere! 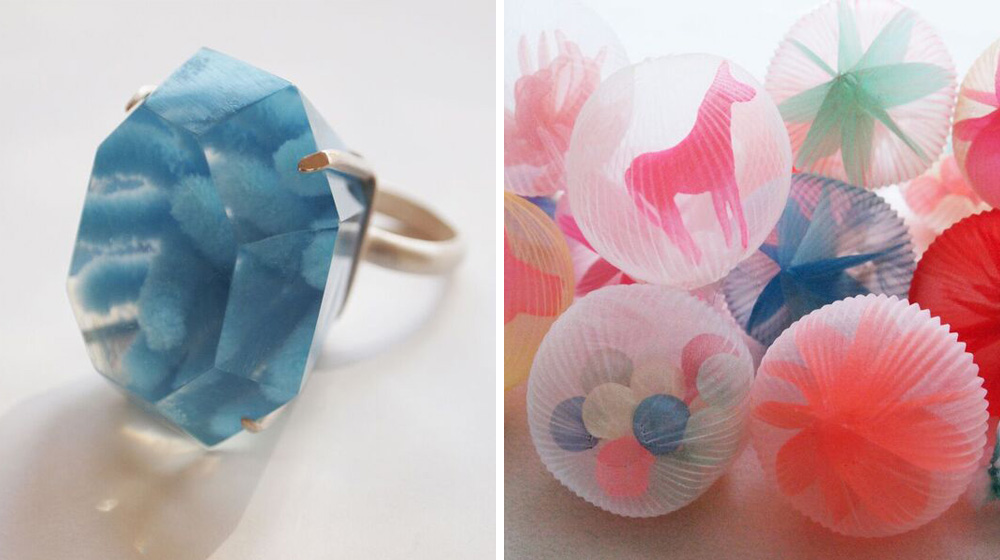 Your Japanese roots are very evident in all of your works. What roles do Art and Artists have in your country?
Historically, Japanese art frequently contained references to religion (e.g. Buddhism), notable figures, or historic events.  In the mid to late 18th century, woodblock prints--originally popular ephemera - became quite popular for their images of the Japanese landscape (e.g. waterfalls, street scenes), people (e.g. actors), and mythical figures.  These prints, often referred to as ukiyo-e ("pictures of the floating world"), offered Japanese people enjoyment and information about activities within their daily culture.

In the rest of the world, Japan is seen as the country of technology, of innovation, of the future. How do you see it?
Japan is about innovation not alone in terms of technology and electronics; its contemporary identity has expanded in breadth and pace, and features advances and renown in cinema, animation, science/medicine, fashion design, architecture, and manufacturing (e.g., paper products, automobiles).  Periodically, Japan's fascination with things of non-Japanese origin (i.e., Western, other Asian, South American) adds another textural layer to its cultural identity.   In terms of art, significant, influential artists have emerged (e.g., Isamu Noguchi, Yayoi Kusama, Chiharu Shiota) in the twentieth century and forward into our current moment.

The Brooches 2 series is a wonderful dive into the worlds most extraordinary seabed! Would you like to tell us something about it?
The "Brooches 2" series possess many affinities.  Yours was a delightful visual analogy suggesting their resemblance to "a wonderful dive into the world's most extraordinary seabed."   I enjoy the element of ambiguity which tends to be built into much of my work.  My effort in the fabric pieces is not to mimic nature/the natural world, but rather to communicate perceived sensory experiences of subjects encountered.

Any projects youll be working on?
I am completing a series of production fabric pieces that will be sold in the Museum of Modern Art Shops, New York and Tokyo.  In late summer, 2017, I will be given a solo exhibition at the Hå gamle prestegard in Norway. In March of 2018, I will have new work presented in a solo exhibition in Munich.  I am also engaged in preparing a site-specific design for a cruise ship interior, TUI Cruises.

If you liked this article maybe you would also enjoy Sarah Symes interview.