There may be a slight delay in processing orders due to a high volume of orders.
Please note that the items "Maori" carded wool and Fluffy yarn are being replenished but the high demand for it is making production times longer than usual.
We´re doing our best to keep the wait to a minimum.
Thanks for your patience!

Just as promised a few weeks ago, here I am to tell you about weaving.

Once again I have to thank you all because you have given me the chance to immerse myself in the true reality of textile production and since most of my time is spent behind a desk, I have to say that it was a nice change! Its always the same old story that, for some reason, the places closest to us are the ones that in one way or another we least appreciate and enjoy.  Maybe because of lack of time, laziness or what else I dont know.  What I do know is that this day trip (which didnt even take me that far) was just what I needed.

It is an almost impossible task to explain in one single post how weaving works and what are the mechanisms, steps and skills that are behind each fabric.  I am not waving a white flag but realistically I do admit that my intention was not to explain the entire process in minute detail, but rather to give you an introduction as well as some basic ideas that I hope you will find useful when you find yourself examining fabrics (and much more). When words arent enough, I hope that the photos of this mini-report and this short video that we uploaded to Youtube will help.

The tool needed for weaving is obviously the loom. There are many many types of looms, especially in the modern textile industry (the same ones that you will see at work in our video), but to simplify things I will describe the work of a loom when creating a plain weave fabric. Plain weave is the easiest and most common type of weave and its structure, despite the necessary modifications, evolutions (and complications!) has been and still is at the foundation of even the biggest industrial looms. 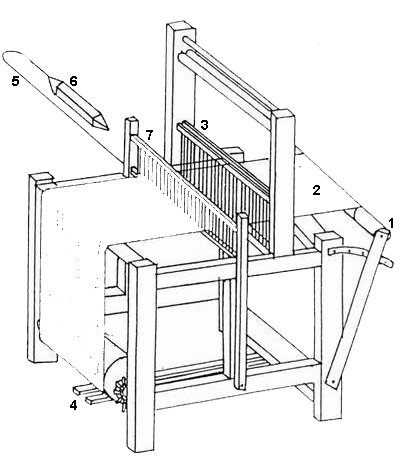 During the weaving process the threads of the weft and warp are woven together.

The threads of the warp are wound on the (1)warp beam (which is a cylinder located in the back of the loom) and divided into two alternate sets (even and uneven sets). Each (2)thread of the warp is passed through a (3)heddle which is the instrument required to move these threads. The even heddles move the warp threads from the even set and the uneven heddles move the warp threads from the uneven set. The heddles are connected to (4)pedals that the weaver can press to lift each individual thread necessary to create the weave.

The movement created by these actions has the purpose of creating an open space (called a shed in technical jargon) through which the (5)weft can be passed attached to a (6)shuttle. The shuttle passes from one side of the loom to the other, unwinding the thread which is then pushed into place by the (7)reed (a sort of comb) to position it in line with the weft from the previous passage.

Therefore one crossing of threads after another is the weaving process.

This technique is at the foundation of each type of loom, whether it be simple or complex, and for 5,000 years has been allowing men and women in all parts of the world to create textiles.

Mariano Fortuny and Delphos, his dress in pleated fabric