Debra Rapoport is a lot of things, but first and foremost, shes a born and bred New Yorker. Eclectic, with a one of a kind aesthetic sense, funny and tireless, she represents the melting pot and the liveliness of the Big Apple perfectly. Shes become a genuine style icon over the years without stating the obvious and staying true to her ideals.

Who is Debra Rapoport?

The relationship between Debra Rapoport and her wardrobe began when she was just 3 years old. It was then, that she understood, that clothes are not only for covering up but have a much greater potential: they can be a way of getting across who you are, make you stand out from the others and act as messengers of emotions and intentions. Her mum urged both her and her sister to play around with clothes boosting their creativity and at the same time offering them an instrument to confront their shyness with. And so Debras journey began.

After graduating in Textile Art, obtaining a masters in Textile Design at Berkeley and almost a decade of teaching at California University she went back to New York where she began creating the motifs that would become her creative contemporary designer manifesto. 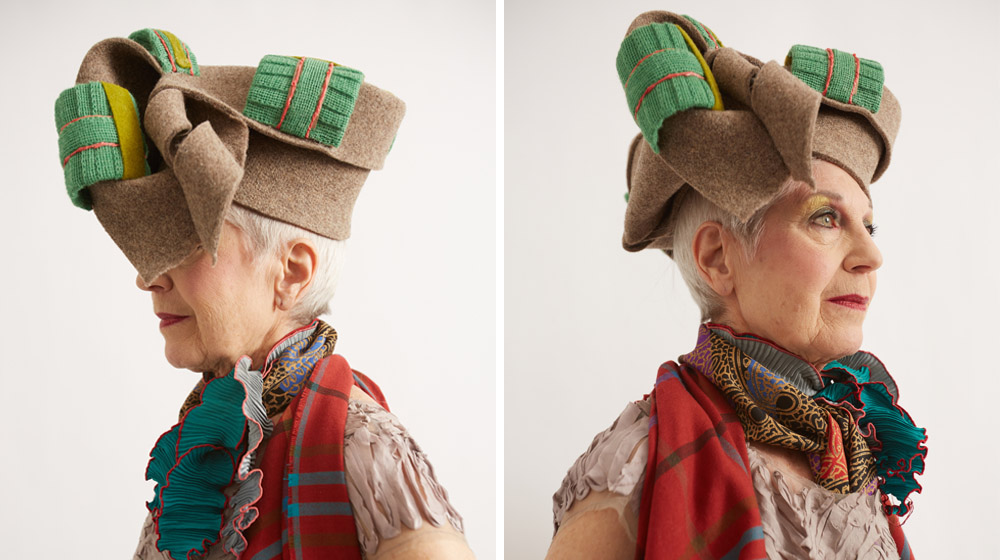 First up is her Dressing Up Over and Again, based on the concept of Assembling, Build and Construct  the ABC method  using colours, materials and layering. The second important point of her creative concept is styling is healing and so Dress to DE STRESS and the third vital point is sustainability. As a matter of fact, Debra Rapoport  also playfully called Debra Debris, has taken refashion to another level by literally retrieving any kind of material and making clothing and accessories with it, in particular amazing hats that have become extremely famous. Old light fixtures, soles from old shoes, toilet paper rolls. all these are brought back to life in Debras hands. Anything can be made into a hat is her favourite motto!

I have fallen in love with Debra and her life that is reflected in her Art and vice versa. I couldnt believe it when she agreed to do a millinery project with our felt! The hats that Debra made exclusively for us have a Victorian and futuristic feel about them. A hat collection that combines felt, Miss Noodle yarn, toilet paper rolls and a simple piece of wire perfectly. We couldnt be happier to have these incredible pieces of wearable art all to ourselves.

Debra Rapoport is also part of the Advanced Style movement that promotes the sartorial style of the coolest senior style icons. Theres even a really interesting documentary film on it too.

Shes so multifaceted and amazing, I could go on and on telling you lots of other things about Debra Rapoport. But instead, get to know her better yourself by reading this article and then start following her Instagram profile.

Doll clothes tutorial in 5 steps: Pollaz friends in the workshop

What's the difference among: boiled wool, pannolenci, felt and prefelt?